The guidelines of this page cover APA 7th edition and specifies what you need to know to cite any various YouTube video content in APA style. For similar but different media, like citing a movie in APA or a tv show,  you’ll need to visit another guide.

Here’s a run-through of everything this page includes:

Note that in your citation, you must indent any lines after the first line. APA-style in-text citations for quoting and paraphrasing are the same for YouTube videos.

Video without uploader’s real name OR video by an organization

Now that you know how to cite YouTube in APA style, you may need more specific information on citing channels, quotes, or comments.

Instead of citing one particular YouTube video, you may want to cite an entire YouTube channel. While the format is similar to citing a YouTube video, there are a few key differences you can see in the format guidelines below.

Citing a direct quote from a video

You may want to include a direct quote from a YouTube video within your paper. While your reference page citation for the quote will be the same as a citation for the whole video, your in-text citation will need a timestamp to help readers easily access the quote (Publication Manual, p. 274). It is commonly accepted to only include a timestamp for the beginning of the quote, but you may use a timestamp range if you think it would be helpful.

TED Talks are often great sources of information, and they can be found on both the TED website and on YouTube. When citing a TED Talk found on YouTube, list TED as the author for the in-text citation and the reference page.

A note on APA 7th edition

The 7th edition of the APA Manual came out in 2020, replacing the 6th edition that came out in 2009. There are a few changes in the newest manual that apply when you need to cite YouTube video APA style.

To cite YouTube videos in APA style, you will need certain information. If available, find the following to include in your citation:

If any of the above information is not available on the same page as the YouTube video, you may need to do a little more research to find it. For example, to find the real name of the video’s uploader, you can click on the screen name to view the creator’s account where you might find their real name in the bio.

Who is the author?

The Publication Manual of the American Psychological Association (2020, p. 344) clarifies that the uploader of the video is used as the “author” of the video, even if they are not the creator of it.

Further information on citing in APA can be found in the Publication Manual of the American Psychological Association in Section 10.12.

Solution #1: How to cite a video when the uploader’s real name cannot be found

When you want to cite a video from YouTube, Vimeo, or any other video-hosting sites, but cannot find the uploader’s real name, use their username in place of their actual name in your APA works-cited citation.

If using a username in place of a typical name, keep the same format and case of the username as it is discovered online, and omit the bracketed “username” part of your APA citation in your bibliography.

Use the username in place of the author’s name for your in-text citation. 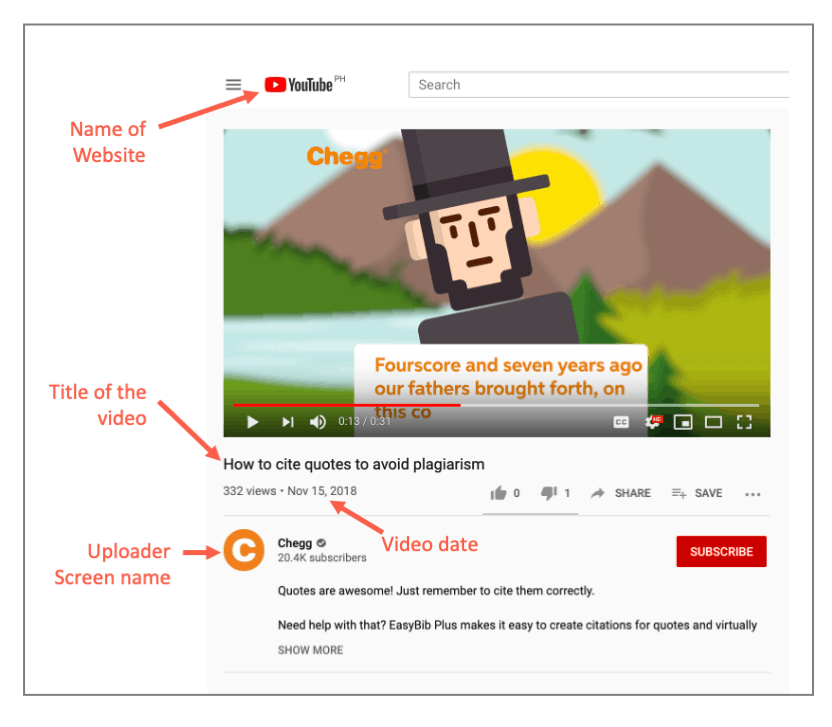 What is the proper way to cite a YouTube video in APA?

To cite a YouTube video, you need to have the name of the uploader or the screen name, the full date the video was uploaded, the title of the video, and the URL (uniform resource locator). If any of these details are not available, you can skip it and add only the available information. The templates for in-text citations and reference list entries of a YouTube video along with examples are given below.

Note that month and day are not mentioned in in-text citations.

How do I cite a movie, TV show, or streaming video in APA style?

To cite a movie in APA style, it is important that you know basic information such as the name of the director, the date, the title of the movie, and the name of the production company.

To cite a TV series in APA style, it is important that you know basic information such as the name of the executive producer, the date, the title of the TV series, and the name of the production company.

To cite a streaming video in APA style, it is important that you know basic information such as the name of the person or group who uploaded the video (or their username), the year, month, and day the video was uploaded, the title of the video, the streaming service, and the URL.

If you want to include the username with the uploader’s full name, include it in square brackets after the uploader’s name. Set the title of the video in italics and sentence case. The word “[Video]” follows the title. Use the streaming service’s title, “YouTube,” before the URL.

MLA 8 vs. MLA 9: Updates and highlightsMLA Citation GeneratorMLA Annotated Bibliography FormatMLA Citation ExamplesMLA In-Text CitationsHow to Cite a YouTube Video in MLAMLA Works Cited PageMLA Format: Everything You Need to Know HereHow to Cite a Website in MLAHow to Cite a Journal Article in MLA